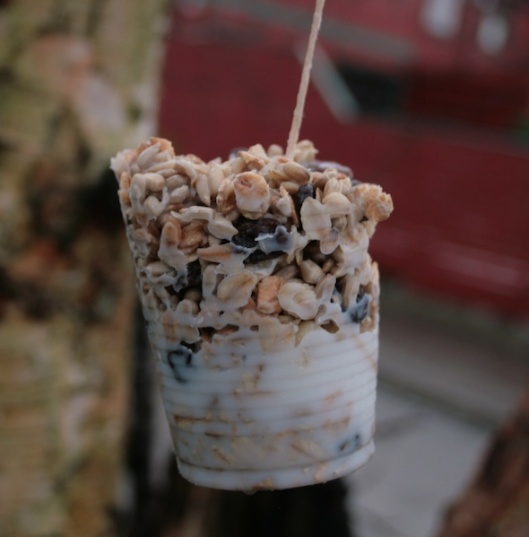 No, I haven’t picked up on British slang, so I’m not talking about the girls in London. Son was ill last week and had to stay home from kindergarten. Trying to be a good parent I also kept him home for a day after he was fever-free, which of course meant dealing with a two-year-old who’s bouncing off the walls. So we made bird-food. 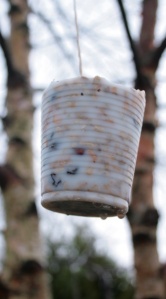 Making bird food is very easy. It might not be cheaper than getting it at the supermarket, nor is it any easier. But it does give that fulfilling feeling of having done something good for someone. Son is also very happy seeing the bird feed off the food that he had made (almost) all by himself, cause it is indeed very easy to do.

We melted a block of coconut fat, added nuts, rolled oats, and dried fruits. We took two small sticks, bound them together to form an x, and tied a string to the x. The x was places in the bottom of a plastic cup (the cup is likely not to survive, 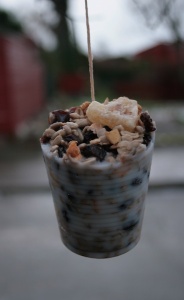 so don’t use something you care about) with the string hanging out. The goo was then poured into plastic cups and left somewhere cold over night.

I assume that heating the cup slightly will cause the the bird food to let go and come loose, but I didn’t bother with that and instead peeled the cup off. The string is then used to tie the food to branches in a tree or somewhere similar. Quite pretty and also very good for the wee birdies.

2 thoughts on “The birds have been fed”