We didn’t have much luck when trying to find berries to pick ourselves this year. It simply has not been a good season for some berries, and some, while, where they were available to us the bushes simply let us down. But luckily for us we have found some good deals. We did find four kilos of raspberries for a decent sum. And the results of the find with recipes will follow soon!

Last weekend we spent a day at my parents’ place, or rather in their garden. They were about to leave for a week long vacation and had no intention of using the many berries in their garden. I thus took Husband and Son with me and picked clean almost every bush.

It’s has not been a very good spring or summer for certain types of berries. I had hoped to find at least a few litres of blueberries, but they were scarce, sour, and small. The currants, black and red, were also scarce this year, and we only found about half a litre of each (despite the 6 bushed of black currant!). 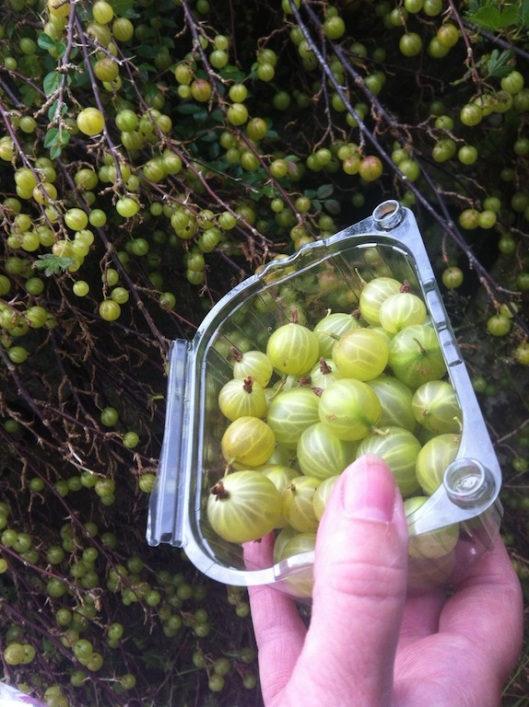 My mother helped relieve the gooseberry bush from its heavy burden

One bush that really surprised me was the gooseberry bush. Never before have I seen a gooseberry bush carry as many berries. Each wee branch was heavy from the big berries. They hung like clusters of grapes. Unfortunately though, I believe I am the only one in the house who likes the taste of gooseberry products, and after about ten litres of berries we decided to stop.

During a short visit at my grandparents’ we picked about half a litre of raspberries.