These videos have been circling in some language related blogs during the past months. As my blog now seems to get a lot of hits from people searching for the history of the English language (after I posted this) I thought I’d add the link to these for your enjoyment.

There are ten videos, which could have been made into one, all lasting about one minute.

I mentioned Stan’s list of links at Sentence First from a few days ago, and then said a few words about Venetian. One of the other links he posted was one to British Library’s Time Line of the English Language. A nice little interactive overview of the evolution of the English language. Check it out here

Stan at Sentence First just posted a list of interesting links. One of them brought me to an article on Venetian. I was immediately fascinated by the subject, maybe it’s because of my interest in Scots, which also opens for a debate on whether it is a language or a dialect.

I have, as mentioned earlier, spent many summers in Italy. These have been spent in the area around Venice, and I have also visited the city itself multiple times. I also have friends from the area, and language has been discussed on more than one occasion. However, I have never once heard anyone mention Venetian. Neither by name, nor has anyone mentioned a dialect different to the one I have heard. 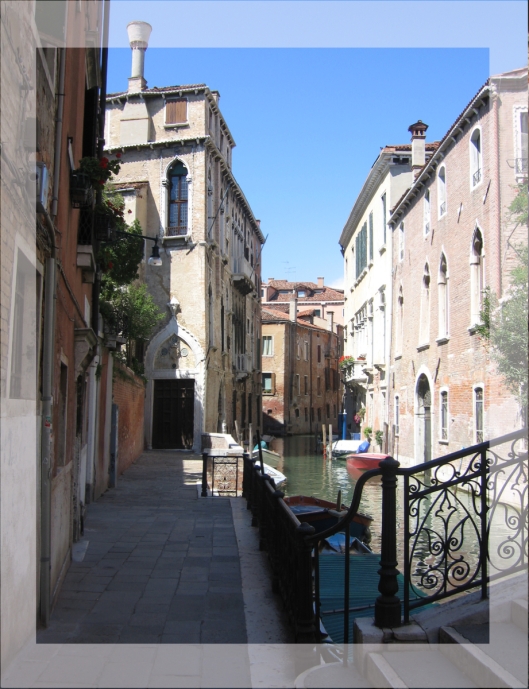 The story of a variety (always the safe word to use) that has developed independently from Italian for so many years, and still hold such a strong position as the article claims, is an astonishing story. I have noted the name of the book written by a scholar at the University of St Andrews (which the article is based on) and will try to find time for it sometime. For now I’ll just share the story with you, and hope that I might get some information for free (maybe you’ve already read the book? I f you have any knowledge of Venetian at all, please, do share!)

I am a language geek, and I’m proud of it. I know its’t not always obvious in this blog, but I am not a native English speaker, and I never proofread my posts (I’m not much of a perfectionist..). I came across a text by Mark Twain while I was in secondary school, going through my fifth year of German. The text was published as an appendix to ‘A Tramp Abroad’. I was only days away from an exam or important test and was given this text to read by a friend. And boy does Twain put words to some of the frustrations I was faced with:

“Every time I think I have got one of these four confusing “cases” where I am master of it, a seemingly insignificant preposition intrudes itself into my sentence, clothed with an awful and unsuspected power, and crumbles the ground from under me.”

Anyone who has attended any German classes in Norway know at least one group of prepositions by heart (aus, bei, mit, nach, seit, von, zu) and unfortunately for many of us, when trying to utter a sentence in German any preposition will trigger these lists. I am one of those who made it through the German classes quite well, as long as I had a dictionary nearby, and the tests were written. When trying to speak German, I stink. A sentence, or the attempt to answer a question using a full sentence, usually results in:

Twain deals well with the problems related to linguistic gender in German, but also quite fittingly describe the syntax (how sentences are created):

“An average sentence, in a German newspaper, is a sublime and impressive curiosity; it occupies a quarter of a column; it contains all the ten parts of speech—not in regular order, but mixed; it is built mainly of compound words constructed by the writer on the spot, and not to be found in any dictionary—six or seven words compacted into one, without joint or seam—that is, without hyphens; it treats of fourteen or fifteen different subjects, each enclosed in a parenthesis of its own, with here and there extra parentheses, making pens with pens: finally, all the parentheses and reparentheses are massed together between a couple of king-parentheses, one of which is placed in the first line of the majestic sentence and the other in the middle of the last line of it—after which comes the verb, and you find out for the first time what the man has been talking about; and after the verb—merely by way of ornament, as far as I can make out—the writer shovels in “Haben Sind Gewesen Gehabt Haben Geworden Sein,” or words to that effect, and the monument is finished.”

You can read the text in its entirety here.

Oops, there smoked the garden snake.

During my first year at university we went to York. While there, I and a few fellow students had a wee project on mistakes Norwegians make speaking English or translating from Norwegian to English. The title is of course an extreme case and most likely also fake.

We interviewed native English speakers and presented different mistakes, from the dire, to the minuscule ones, to see how they reacted to them and what types of mistakes we can get away with before it results in loss of meaning. The two sentences were added just for the fun of it, but what meaning people tried to extract from it proved very interesting and entertaining.

This post has about as little meaning as the sentences, but every time the room wheel comes around I think about the title sentence, and I thought I’d share. Besides it would be interesting to see what you extract from the two examples.

Just a quick clip about pronunciation and speaking correctly.

You have probably seen this text some time or another during the past, say 10 years:

Aoccdrnig to a rscheearch at Cmabrigde Uinervtisy, it deosn’t mttaer in waht oredr the ltteers in a wrod are, the olny iprmoetnt tihng is taht the frist and lsat ltteer be at the rghit pclae. The rset can be a toatl mses and you can sitll raed it wouthit porbelm. Tihs is bcuseae the huamn mnid deos not raed ervey lteter by istlef, but the wrod as a wlohe.

Over at Mighty Red Pen these guys are mocking that text, explaining it all to you. It is worth a few minutes of your times. I, at least, smiled a bit.

But if you managed to read my headline before reading the rest of this post, you’re off the hook.

Have a great evening!

I found the English “equivalent” to the last post, though the message is not the same, it has a lot to it as well. Worth the few minutes! 🙂

I know many of you have already seen this, but as a (n aspiring) linguist I have to share it. I think the clip is just brilliantly made, a bit too long for most people, but still brilliant. It’s in Norwegian, and unless you find a Great (yes, need capital letter there) translator, the point would probably be lost in translation. Are you a language fan yourself, then you might be able to understand some of it, even though your native tongue’s not Norwegian. Good luck!