We had to get near Loch Ness. We couldn’t have been that close and yet never near it. We found a lay-by where we stopped. Something that looked like a path was visible in-between the trees. We tip-toed, slipped and slid down towards the lake. Luckily I’ve walked in similar terrain before and have developed a feeling for what can easily be stepped on and what should be avoided. I thus made it to the bottom with my jeans the same colour as they were when I left the car. 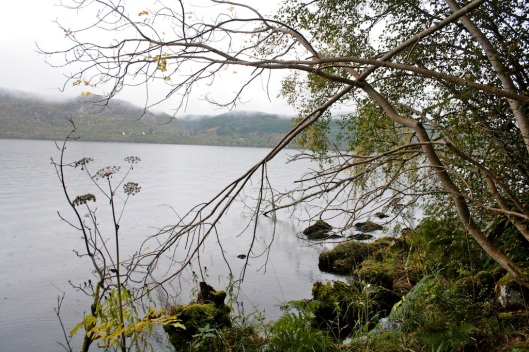 We laughed and talked on our way down, all finding our solution to the challenge of seeing Loch Ness up close quite amusing. While driving along the shore we had done our best at spotting Nessie, and although we did not see Nessie herself, many signs of life were found, although few that could ever have been taken seriously by others than ourselves.

But then, we reached the shore and tranquility set in. The water was completely still. Low clouds revealed only a stripe of land across the lake. Trees hung over and reflected in the water. The setting silenced the three of us. Tranquility ruled. 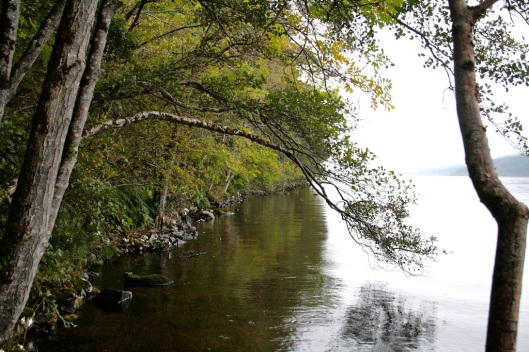 But not for long. Serenity was killed by talking, laughter, and joy. Not a loss that will be long mourned.

Loch Ness is, obviously, a freshwater lake. It’s big, deep, and Nessie probably functions as a water filter. The water thus had to be tasted. You’re very welcome, now you don’t have to, we’ve done it for you! Compared to the mountain streams in Norway, the tap water in Drumnadrochit (which was good!), and previous encounters with drinking water, set this water as drinkable. Though with a slightly muddy taste – which is probably only due to a different mixture of minerals than what we are used to back home 😉