Son and I visited Copenhagen. We stayed with my brother who lives a few minutes outside the city, but we did spend a few hours walking around in the city centre (not to mention the hours we spent driving in and around the city). It’s my first time in Denmark as a mum, and my first time in a big city all alone with my son. No plans were thus of the certain type. We had a wee list of things we wanted to see or do, and did what felt right there and then. One afternoon was spent walking up and down Strøget – probably the best known pedestrian shopping street in Denmark.

We didn’t shop though. We walked about looked at things, people, buildings and, most importantly, dogs. We visited the few toy-stores we found (the lego shop being a bit of a disappointment) but had to give up the project of finding Son a pair of new shoes. 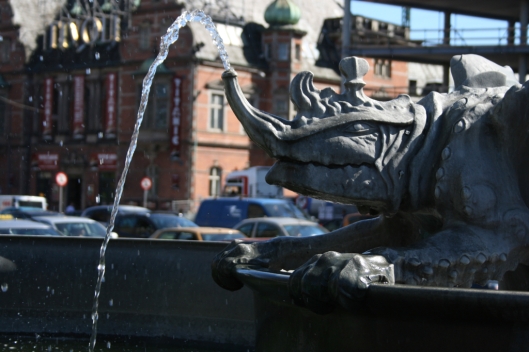 The weather was great and Son is the most patient two-year-old I have ever met, however, his obsession with birds was a bit straining at times (whenever he sees a pigeon he wants to pet it, which is rarely what the bird wants). We stopped for ice-cream and simply enjoyed each other’s company. A good day out.