After a year of packing my daily schedule to the brim of what’s possible I now find myself with quite a lot of time on my hands. My bones ache and I definitely need the time off. My head won’t let me relax completely though. I’m going Martha Stewart on the house and find myself constantly planning and starting minor projects.

The kitchen project, which I wrote about here, was started many months ago. Now it is nearly done, but due to a certain’s warehouse inability to read my mind and automatically know what I want and when I want it, a few things are missing and the photos thus have to wait. The colour, I can inform you, is white.

My herb project started last year. I planted a few herbs, killed most of them by ignoring them while on holiday, and let the rest to fend for themselves. The plants in my house, and also those outside that are not part of Husband’s well tended garden, are sturdy plants. They have to be or they’d never survive. In the explanation of a person with green fingers, I’d be the antonym, the exact opposite. But, the plants that I do manage to grow can survive anything. I grew chives and oregano last year, but left them outside through one of the worst winters I can remember, still, both came back this year. The pot they were planted in did not survive though… 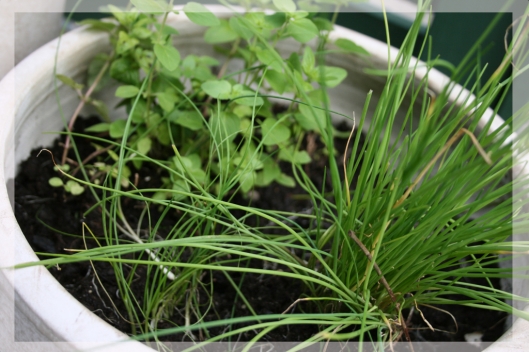 The chive and oregano that can withstand anything

I planted some more herbs this spring. But many died while I was working on the last part of my thesis and my husband was at work. The few that survived was tested again when Son and I went to Denmark. Two survived when I came back, a small, but not weak, thime and some indian cress. I think both will survive, but never grow as strong and sturdy as they would have been in anyone else’s garden.

I won’t spend as much time at work this year so my wee herb garden will have increased by this time next year. I hope the strong, green, little, miracles will still be with us then. (The indian cress however will not survive, it only lives for one season and I have no plans of trying to achieve the impossible!)

4 thoughts on “(the three pots that constitute) My Herb Garden”